The aim of the blog is to analyze the data and provide objective information about the events in Agdam, during which civilians of Khojaly village were killed. Agdam events have become one of a major promotional factors used by Azerbaijan against the Armenian side.At the same time work on the factual material showed that the Azerbaijani side is using a large number of fakes, including the use of photographs of people killed in other conflicts or natural disasters.

Azerbaijani side claim the death toll is 613 civilians, it is absolutely evident that the Khojaly events, by no means, fall under the category of genocide. In spite of this, Azerbaijan, on a governmental level, is engaged in presenting the Khojaly events as genocide

human rights watch report of death toll amounted to 100-200 only yet Azeris had to exaggerate this figure.

***Given the fact that the Azerbaijani side fully controlled the territory where the Khojaly inhabitants were killed and had the opportunity to make an unimpeded and unrestricted survey not only of the very spot but also of the dead we start our study of the events.

what really happened:
It's important to point out that In April 1992, the first President of Azerbaijan Ayaz Mütallibov during an interview with a Czech journalist Dana Mazalova confessed that Azerbaijani opposition was guilty of the Khojaly tragedy, and that Armenians had left an open corridor for the citizens to pass through before attacking. This was the last "mistake" of Ayaz Mütallibov, which produced a fertile ground for Aliyev to accuse him in betrayal. Later, Ayaz Mütallibov had to resign and flee from the country. the interview is archived and what Ayaz Mutalibov said can be verified.

the information given by the 1st president of Azerbaijan, and many other facts prove that Khojaly citizens were killed by Azerbaijani government. For instant, the corpses of the victims were not found in Khojaly, but they were found in Aghdam, a place controlled by Azeri forces and about a kilometer far from Khojaly.

The fact that whoever spoke of the true events of Khojaly from Azerbaijan either was killed or jailed like Eynulla Fatullay should not be ignored.

***Chingiz Mustafaev the one who took the video footage of the victims, as he took photos of the victims in one day and later he came back to the  same spot where the victims were lying to find out that someone manipulated and scalped the bodies,  after he started to make questions he was killed. also the fact that he was able to take 2 video footage  in 2 different days proves that Khojaly civilians were killed in a region controlled by Azeri forces during that time.

Questions that have never been answered about Khojaly Events?! Click to see

Materials that will be used in this topic:


***It would be great if you read and see all the materials presented in this part of my blog, but I assure you if you skip all of this and only look and read the descriptions below each photo you will get to know the ultimate truth.

Videos
How do you explain that Azeri video footage shows the bodies of the dead with signs of abuse (scalping, cutting off limbs/soft tissue). On the other Azeri video footage the same dead are revealed, but with no traces of abuse (the same corpses are not scalped and limbs/soft tissue are not cut off). It is obvious that between the first and subsequent shooting of the Azerbaijani operators someone abused the bodies of the victims. Who and for what purpose mutilated bodies of people?


Photos
Some photos used by Azeris do not belong to Khojaly victims, taken from other disasters and presented as khojaly victims, I will show where these photos were actually taken from , these fake photos being used and held in protest signs by Azeris will be viewed and on their websites and media other photos are photos of the actual victims but we can clearly see some victims are being used twice and even triple times to demonstrate a role of a different victim(s) - in one photo the body would be scalped and has torture signs in another photo of the same victim would be just a dead body with no scalps or torture signs.

Documentary Between Hunger and Strike

2 irrefutable proofs before the photos evidence 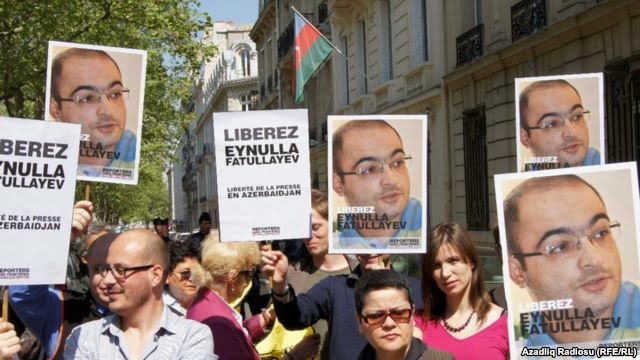 While international calls for his release (such as this one in France) may not have had an immediate effect, Eynulla Fatullayev says, "They couldn't have killed me with everyone watching."


THIS IS VERY IMPORTANT:
non-Armenian source telling about the Azeri journalist who was jailed for telling the truth about Khojaly and blaming Azerbaijani opposition for killing their own people. look what he says:

"Fatullayev defends his 2005 comments — which held Azerbaijani fighters, not Armenians, responsible for the 1992 killings — as consistent with those put forward by the Azerbaijani government itself, but says the regime has long sought to use the Khojaly events to persecute its opponents.

"Look at Ayaz Mutalibov, the first president of Azerbaijan," he says. "He's still under criminal investigation, and for what? Complicity in the Khojaly events. Officially he is charged with failing to protect his citizens and exposing them to danger. Fahmin Hajiyev, the head of Azerbaijan's interior troops of the country, spent 11 years in prison because of the Khojaly events.

Zory Balayan never wrote such book, this is a made up book by Azeris.

Zory Balayan challenged anyone to show a copy of the book
here you can see his statement about this book:
http://www.panarmenian.net/eng/society/news/18301/

also you can check Zory Balayan wikipedia page and check the list of his books, a book with the name "Revival of Our Soul" is not listed among his books. Reportages similar to the aforesaid can be found in Trend, Bakililar, Day.az,karabakh-doc.azerall.info, justiceforkhojaly.org, khojaly.org, khojaly.net and other Azerbaijani Web Sites spreading around a new “brand” named “genocide”.
The scene of the valley, bestrewed with dead bodies could shock even the prepared onlooker, that is why such sequences are used in the reportages in the capacity of a shocking element. But the Khojaly events are illustrated with photographs of pogroms in the Balkans which happened in 1999
Besides, the original photograph is a color photograph, but, apparently, the Azerbaijani propagandists realized that black-and-white photos correspond more to “genocides NO.2 и NO.3”. Then it was just a technical matter: using an ordinary editorial program, for example, the Photoshop program, to decolorize the photograph is not difficult at all.
the Original colorful Photo of Kosovo Victims: 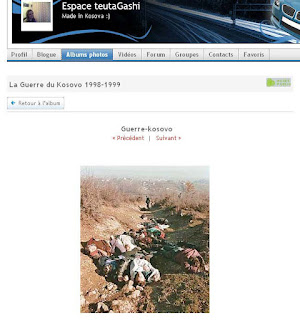 The same photo in black and white used by Azerbaijan: 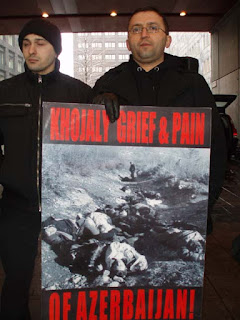 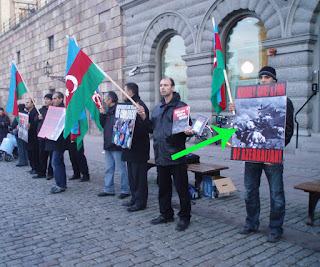 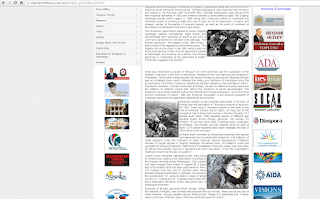 Azeri websites using this photo for their fabrication of khojaly events:

***Finaly the ultimate proof that this photo is taken from Kosovo, watch the following video and you will be seeing a video report from Kosovo showing these victims lying on the ground  (to see this exact (VIDEO) shoot you can skip to minute 2:01):

The original report here  you may skip to second 00:40 This photo belongs to a child from the Bhofal disaster in India in 1984 see the link below:
http://www.thecollectiveint.com/2013/06/10-photos-that-sent-waves-across-world.html
or just google "Bhofal disaster" and check images section or the reports to see the photo of this child.Azeris share it on their blogs and websites as khojaly victims in 1992 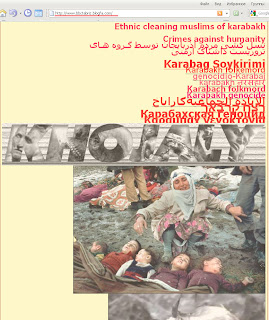 the original photo shows Turks victims of the Earthquake that happened in 1983
A website shows this is a photo of Kurdish victims of an earthquake in Turkey: http://www.thecollectiveint.com/2013/06/10-photos-that-sent-waves-across-world.html 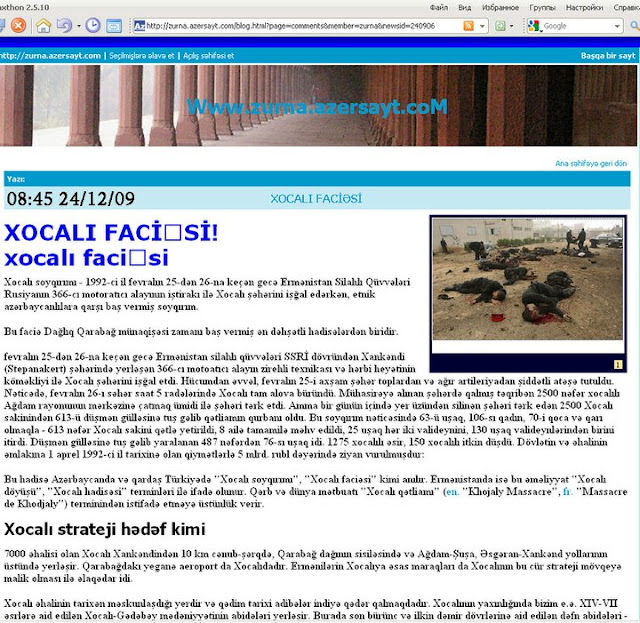 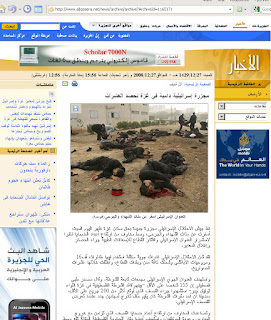 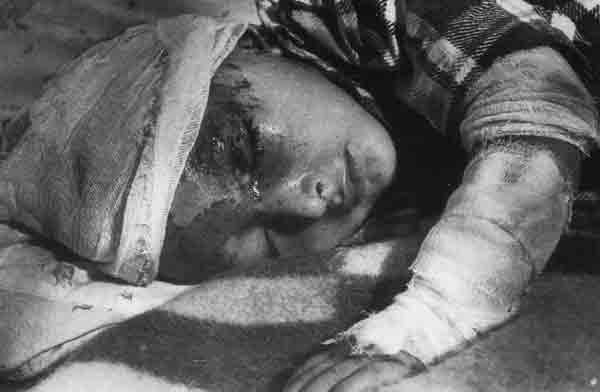 The photograph of a child “tortured and killed in Khojaly by Armenians” is largely disseminated as a factual material used as an indication of “brutality” of Armenians.

“The dead Azerbaijani child on the Khojaly roads”  ( Year 1992 )for some reason appears in A. Orekhovski’s reportage “A Long Way to Erkech” published in the newspaper “Komsomolec Kuzbasa” on January 25, 1991.

However, the validity check showed that the photo has no connection either with the “Komsomolec”, or with “Khojaly : in these photos taken by the reporter Oleg Litvin are the victims of the act of terror in 1989

The most striking and important thing in all this is that the child photographed in 1989 can by no means be a victim of events at Aghdam-city, at night on 25-26th of February,1992. 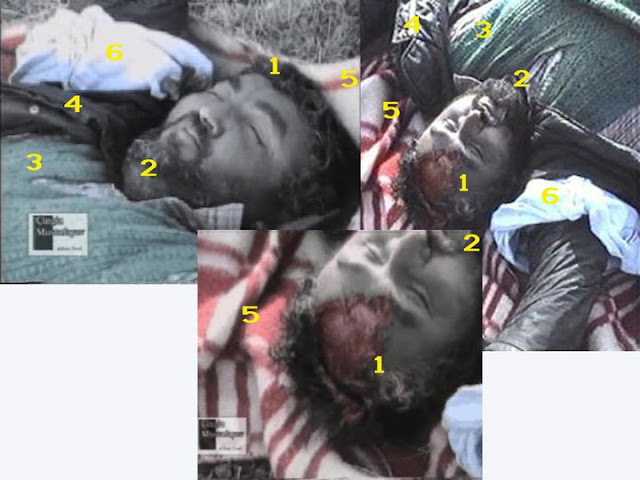 The Azerbaijani chronicles, on the Azerbaijani-controlled territory, on some pictures the corpse is scalped, on the others - it is not.There is no doubt that this is the same man - for that one only needs to compare the pictures.Watch the above posted comparative photo:

The picture of the same man used to show 2 victims one is dead with no torture and the other was scalped alive. 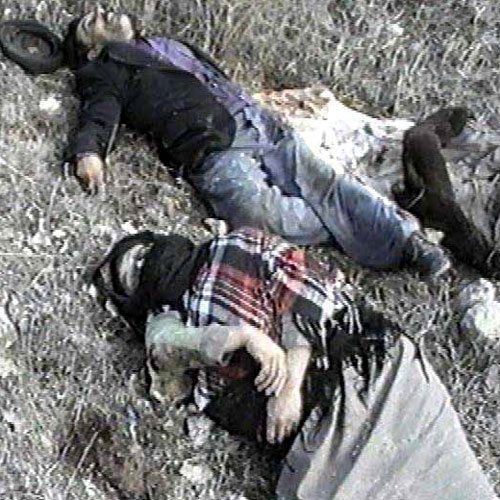 More Details mentioned in the third picture above. 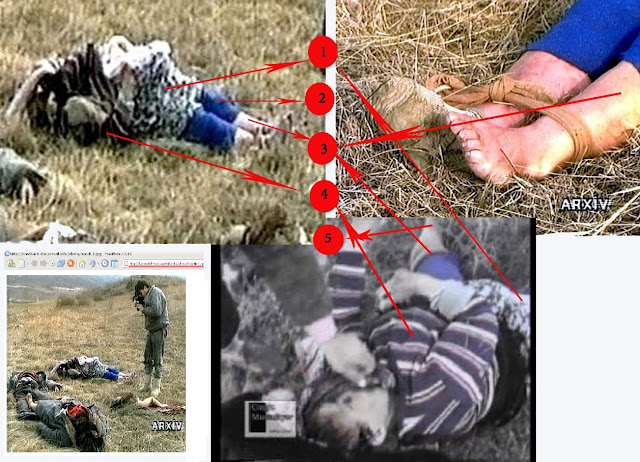 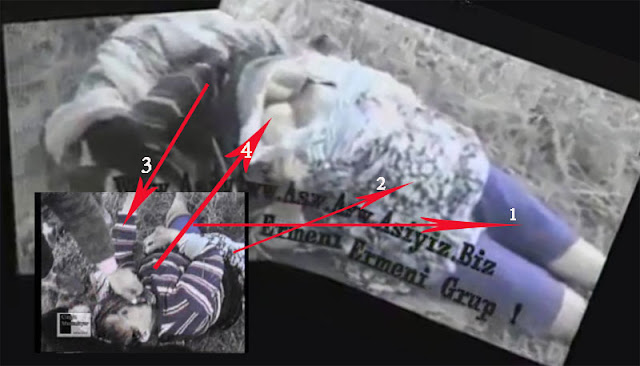